Whom is going to Sacramento for 1st Round? Chance to watch Future Recruits 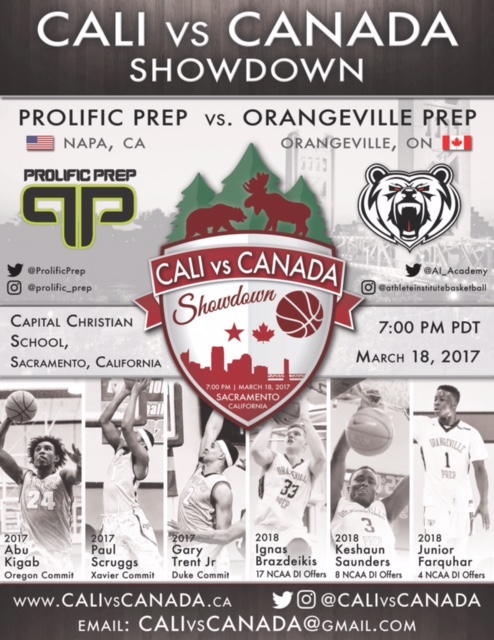 Whom is attending the game Friday in Sacramento? If you are going, you should check out some of Creighton's recruits for next year during the off-day (Saturday)

On the weekend of March 17th - 19th the city of Sacramento is hosting the NCAA tournament and the Cali vs. Canada Showdown which will match the #1 team in Canada (Orangeville Prep) and a Top 5 HS team in the USA (Prolific Prep). We know it is in Sacramento, but we are hoping we would get all of our Napa Valley fans to attend our last big game.

The game is in Sacramento on Saturday, March 18th against the #1 ranked HS team from Canada (Orangeville Prep) who is currently 31-3 and only has 3 seniors on it's roster. They have tons of talent in their Sophomore and Junior classes. Prolific Prep is currently 27-3 with 3 losses by a combined 5 points and feature McDonald's All-American and Duke Signee Gary Trent Jr., Oregon Signee Abu Kigab, and Xavier Signee Paul Scruggs.

The NCAA tournament is in Sacramento that weekend with games on Friday, March 17th and Sunday, March 19th at the Golden 1 Center. The Cali vs. Canada game will be played on the off-day in between, Saturday, March 18th right down the street at Capital Christian School in at 7pm.

The game will be with the same rules as an NBA Game (48 minutes, 6 fouls). Lots of entertainment!